The Japanese archipelago is made up of 6,852 individual islands which are the home of a number of distinct regions. Each region had its own language and as control of different areas and the country shifted between clans, feudal lords, and emperors, so did trends in language that brought about the existence of dialects as we know them today.

Japan became unified under a single ruler at the beginning of the 17th century marking the beginning of the Edo Period (1603-1868). However, it was not until the latter half of the Meiji Era (1868-1912) that efforts were made to standardize spoken and written Japanese. The bungen itchi movement began as a means to create a language that could be easily understood – written or spoken – by anybody in the country. The Yamanote language of what is now central Tokyo was chosen as the standard and its use became compulsory in schools. Later, it broke into everyday life through regular use on radio and television.

As the standard dialect came into regular use, regional dialects began to suffer as more and more young people began to favor hyōjungo over the languages of their communities. This is particularly the case for young people who move to big cities in order to avoid being seen as a sort of “country bumpkin.” However, there are many regions in Japan whose residents have no qualms with the use of their language and do so proudly.

Each of Japan’s 47 prefectures is considered to be part of one of Japan’s 8 larger regions. The dialects used in each region can be largely divided into 4 groups which can again be split into 16 dialects: 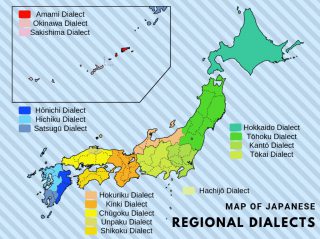 Japan’s geographic barriers such as mountains and rivers separate communities from one another and have also allowed for these people to put their own twists on the local dialect creating sub-dialects that are distinguishable only by locals in the area.

Hokkaido is Japan’s northernmost island and prefecture. Famous for its fresh seafood, a wealth of nature, and snowy slopes, Hokkaido is a popular destination among Japanese foodies and snowboarders. The dialect of the area has many influences particularly from Ainu languages and the neighboring Tōhoku dialect.

Northeastern Japan (Tōhoku) is one of Japan’s most nature-rich regions and home to many of Japan’s most beautiful views. The dialect itself is considered to be one of the most difficult for Japanese people from other parts of the country to understand.

Quite possibly the most famous of all the Japanese dialects, Kansai dialect is spoken by the residents of Kyoto, Osaka, Nara, Mie, Wakayama, and Hyogo prefectures. Many of Japan’s most famous comedians, musicians, actors, and television personalities come from this area so it is no wonder that it can be regularly heard on TV and radio.

Hichiku dialect is comprised of several sub-dialects including Hakata dialect which is considered to be the representative dialect of Fukuoka by many Japanese people.

Though regional documents might not be of much use in areas outside of where they are spoken, they are definitely an interesting aspect of the culture and are great to learn if you would like to increase your understanding of a certain locality and its people. They are also just plain fun to learn. Try your hand at a dialect today.

Reiwa – A New Japanese Era and What it Means

Get Connected! Mobile Phones and the Internet in Japan